Win a Foo Fighters Concert in Your Garage!

This might be one of the best contests in recent years. Sponsored by Blackberry, the Foo Fighters will be giving eight lucky fans a private garage concert with 50 of their friends. Since their newest album, ‘Wasting Light’, was recorded in Dave Grohl’s California garage on analog tape, it makes sense!

How could it possibly get any better? Oh yeah, the winners get autographed copies of the band’s newest album, releasing on April 12th!

To enter the contest, simply head to the official website and explain why you deserve to win, along with a pic of your garage (I mean, Dave Grohl can’t perform in just anyone’s crash pad, right?) 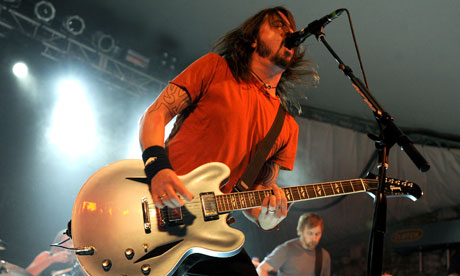 Dave Grohl rocking out at the Foo Fighters 2011 SXSW performance.

And if you haven’t got the right space to lend for the contest, by listening to the radio stations of contest sponsors, you could have the chance for tickets to the ‘garage concert’ in your town!

Will you be entering the contest? Do you even care about the Foo Fighters new album?

Tags: California, concert, contest, Dave Grohl, Foo Fighters, garage concert, new album, radio, Rope, sweepstakes, SXSW 2011, Wasting Light, win
You can follow any responses to this entry through the RSS 2.0 feed. You can leave a response, or trackback from your own site.
« The Fashion Industry Raises Awareness for Japan
Hedi Slimane Talks Dior and Cheap Fashion »