It has not even been a week since Hurricane Sandy swept up the east coast and left a path of devastation. Many people still do not have electricity and/or running water. According to the NY Daily News, the death toll from Hurricane Sandy has risen to 40 people. One can only wonder why Brazilian model Nana Gouvea would pose seductively for a Hurricane Sandy photo shoot, making light of a catastrophic event.

You could present the argument that maybe Gouvea’s publicist arranged for her to do the photo shoot. However, I believe there comes a time when you must think for yourself. The east coast is still in the aftermath of Hurricane Sandy. It is insensitive to pose for pictures that make light or appear to mock the situation. Also, I wonder if the person whose car she is standing on, knows this is the case.

In addition, the Huffington Post reports that Gouvea told EGO, a news website that, “She loves hurricanes,” they provide her with a chance to spend time with her husband, who is the photographer. Yes, one could argue the point that if you are in a place with your loved ones during a natural disaster, you may get to spend quality time with them. But, this still does not give Gouvea the right to pose for an insensitive photo shoot. I wonder if Gouvea’s explanation would have been the same if, (God forbid) one of her family members would have been a victim of the storm. 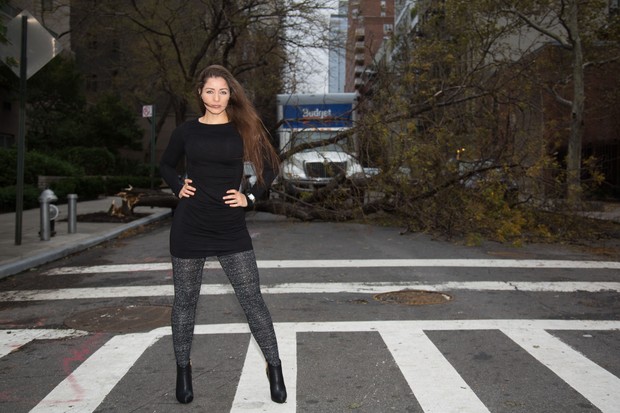 Moreover, Gouvea’s photo shoot reminds me of Damien Hirst’s exhibit of dead butterflies all for the sake of art. I guess Gouvea’s beauty is suppose to outshine the debris, but I do not think it does. It would have been different if she delivered a humble message of being a survivor of Hurricane Sandy, but this was not the case. I believe that the photos are tasteless. If Gouvea was looking for publicity, then she got it. Her photos have gone viral. I think the proper place for the photos is the Hall of Shame.

What do you think of Gouvea’s photoshoot?

Tags: Hurricane, nana gouvea, photoshoot, sandy, tastless, wrong
You can follow any responses to this entry through the RSS 2.0 feed. You can leave a response, or trackback from your own site.
« Celebs Go Crazy for Red
Fans Go Gaga for Telephone Part II »