No, this is not a tribute to the popular Weezer song. Artists are teaming up to honor Buddy Holly, a rock ‘n’ roll icon and pioneer in the 1950′s who died in a plane crash at the early age of 22.

While Buddy Holly’s career was tragically cut short, he lived on through his creative influence. This tribute album, Rave On Buddy Holly is being released by Fantasy Records/Concord Music Group and has an amazing line-up of artists. Big names like Cee Lo Green, Florence + the Machine, Paul McCartney (who produced and hosted his own tribute in 1985), Modest Mouse and more are set to let their own creativity fly on covers of Holly’s number-one tunes.

It’s a bit suprising not to see Weezer on the bill, because even though their song “Buddy Holly” doesn’t have much to do with the artist himself, I think it encouraged some people to find out more. That aside, the line-up is still one that can’t be beat right now. Imagine if this was the listing for a new musical festival. It would be crazy!

The best part will be hearing how each artist brings a new element to each song. The track listing for Rave On Buddy Holly has already been released by Pitchfork so take a look below (and click the links to hear the Buddy Holly originals): 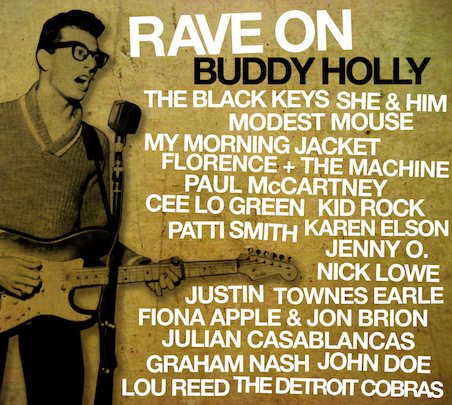 
The tribute album is set to arrive in stores on June 28th, which happens to be my birthday. At least I know one birthday present I’ll be getting!  Check out the title track from the album, performed by Mr. Holly himself, below:

Were you excited to hear the news of the tribute album?  What’s your favorite Buddy Holly song?

Tags: Buddy Holly, Concord Music Group, Fantasy Records, Florence + The Machine, Modest Mouse, Paul McCartney, Rave On, Rave On Buddy Holly, rock 'n' roll, She & Him, songwriter, The Black Keys, tribute album, Weezer
You can follow any responses to this entry through the RSS 2.0 feed. You can leave a response, or trackback from your own site.
« DNA Sues Ford For Stealing Model
Today in History: Beatles Reach Top of the Charts »