Artists Have “60 Seconds Left” on Pitchfork.tv 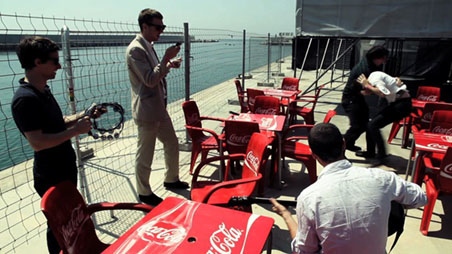 The Walkmen in "60 Seconds Left"

Pitchfork recently unveiled a new series on the video-based part of their site, Pitchfork.tv, called “60 Seconds Left.” For just one minute, artists are allowed to express themselves however they want.

Pitchfork partnered with four Paris-based photographers, Guillaune Brouzes, Aslak Lefevre, Sylvain Gouverneur and Barbara Silverstone, for the show. The photographers already had a few episodes under their belts, but the new collections are the first with their Pitchfork collaboration. Their first three episodes were done at the Primavera Sound Festival in Barcelona and include the Walkmen, Gang Gang Dance and Baths.

Since the show is so spontaneous you are bound to see some crazy anticst, including two members of the Walkmen wrestling while performing “One Headlight” from the Wallflowers.

You can watch all the premiere episodes over at the “60 Seconds Left” website or Pitchfork.tv!

What do you think of the “60 Seconds Left” concept?

Tags: 60 Seconds Left, Aslak Lefevre, Barbara Silverstone, Barcelona, Baths, Gang Gang Dance, Guillaune Brouzes, paris, Pitchfork, Pitchfork.tv, premiere, San Primavera Sound Festival, Sylvain Gouverneur, The Walkmen, tour
You can follow any responses to this entry through the RSS 2.0 feed. You can leave a response, or trackback from your own site.
« Clogs Are It for Your Feet This Summer
Lupe Fiasco Calls Obama a Terrorist »