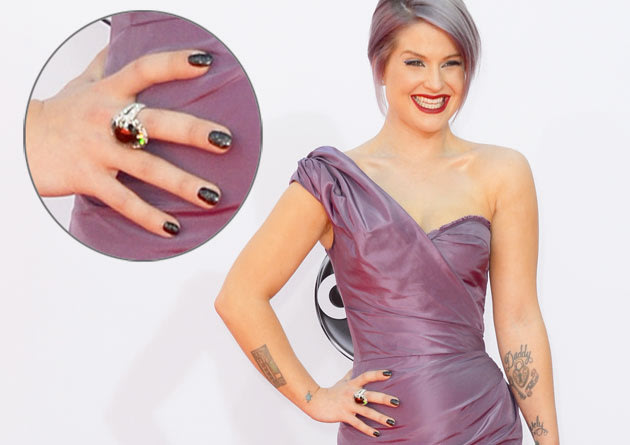 Everyone’s been talking about Kelly’s rather extravagant manicure for the Emmy Awards, where she wore Azature’s ‘black diamond’ nail polish, which contains 267  carats of black diamonds. Fans were not happy, to say the least. According to Ecouterre, the pricey manicure became the talk of twitter and instagram as soon as the pictures hit the web.

Azature proudly advertises that their new enamel calls itself ‘ the most expensive nail polish in the world.’ According to the website, the ‘cheaper’ version of the black diamond nail polish became available to the general public this past August 2012 at Fred Segal’s. Although Azature’s nail enamel has sparked the most attention, Azature, originally from LA,  is recognized worldwide for his high-end jewelry collection, and even selected by Forbes China to be one of the most successful business in 2009.

“The black diamond is the ultimate fine jewel. Its combination of beauty, mystery and sophistication makes it a timeless luxury,” says Azature, the owner of ‘Azature,’ who, according to thewell.spafinder, only goes by that name.

It makes me extremely upset when celebrities spend more on a manicure than what it takes to pay for my college tuition and my first house. Even if Kelly did not pay for her manicure and it’s just a publicity stunt, I still think its disrespectful to wear such an expensive nail polish when there are people starving. I’m with the angry fans on this one!

Tags: fashion, Kelly Osbourne, manicure
You can follow any responses to this entry through the RSS 2.0 feed. You can leave a response, or trackback from your own site.
« Apple Maps Fail to Mark the Spot
Why The Oscar’s Ploy to Increase Youth Votes Won’t Work »