You Know Who It Is: A Look Into the Rise of Wiz Khalifa 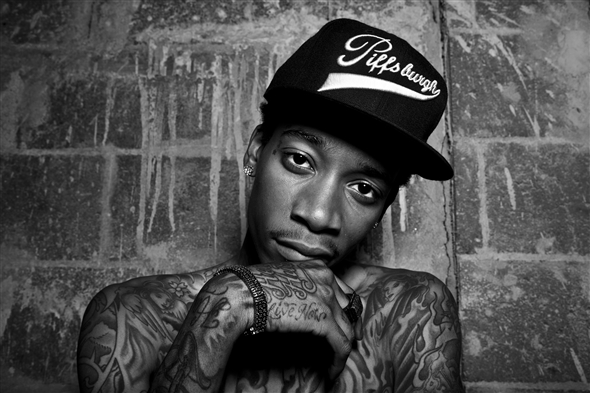 The Pittsburgh resident and proud Steelers fan released his song on YouTube in October. Since its release, it’s progressively become more popular as the Steelers scored more touchdowns each week. According to MTV, the video gets about 375,000 hits a day. Funny how the song doesn’t even reference the team – just its colors. Regardless, Khalifa said he wanted the song to be the Steelers’ official anthem.

“I took that hometown pride and put it in a song,” the “Say Yeah” artist told MTV.

What made the song blow up even more were all of the not-as-great knockoffs, including the Jets’ “Green & White,” the Ravens’ “Black & Purple,” and the Bears’ “Blue & Orange.” Tom Hanks’s son even took it to the collegiate level with his “White & Purple” on behalf of Northwestern.

Lil Wayne followed the bandwagon, too, but his loyalty is with the enemy: the Green Bay Packers. It’s one thing to root for your home team (I know, that’s more baseball talk), but Lil Wayne’s roots in New Orleans aren’t even close to Wisconsin. Nonetheless, he is putting his money on the underdog. “Got a call from my homey, this just in. The Packers in the Super Bowl and they better win,” so his song goes.

Looks like it will be a battle of the songs as well as of the actual teams. May the best collaboration of colors win.

Tags: Black and Yellow, Jets, Lil' Wayne, MTV, Packers, Ravens, Steelers, Tom Hanks, Wiz Khalifa, YouTube
You can follow any responses to this entry through the RSS 2.0 feed. You can leave a response, or trackback from your own site.
« Is It Still a Man’s World? Twilight’s Catherine Hardwicke Thinks So
Primo Line-Up: San Miguel Primavera Sound Festival 2011 »